Shropshire Badger Group has a number of members across the County who are trained and equipped to rescue orphaned, sick or injured badgers and to transport them to the Cuan Wildlife Rescue Hospital at Much Wenlock, while ensuring complete safety for the badger and everyone involved.

The nearest appropriate member can be contact in the same way as for an injured road casualty.

Orphaned cubs tend to be the easiest to manage, while waiting for assistance. They usually appear unexpectedly in a situation that’s clearly unusual and often seem to be ‘lost’ or weak. Wrapping the cub in a towel will often stabilise the situation but they may be frightened or a little feisty and a sharp nip, akin to that of a puppy, can be quite a surprise.

All sick animals tend to look for ‘peace and quiet’ and the refuge for badgers can be the most unusual of places.  When found, the best option is to leave the animal undisturbed until help arrives but if it’s likely to leave then it’s a matter of using whatever is available to try to keep it in place.

Badgers that have been injured, by whatever means, are a completely different prospect. Providing they’re still conscious, they will be frightened and potentially very aggressive and normally should not be approached other than perhaps to cover them with a blanket, or something similar, which might well calm them until help arrives.

The recovery of the badger could then appear to be quite physical but it is necessary to ensure that the badger is properly restrained so that its injuries are not worsened and the rescuer remains safe throughout.

Badgers caught in snares are a particular problem and the whole incident can be very distressing for all concerned. If still conscious, the presence of the finder can trigger ever more violent attempts to escape which will in turn tighten the snare and increase the pain and the severity of the injury. The badger will be terrified and extremely aggressive so nothing should be attempted unless it seems to be in the later stages of its capture and might be calmed by the application of the inevitable blanket.

It is imperative that no-one attempts to release the snare from its anchor point. If that happens the badger will feel an easing of pressure and will make a determined effort to escape. If it succeeds with the snare in place the badger will not survive the inevitable infection and other effects of its injuries.

Once again the final recovery will be quite physical so that the badger can be totally restrained while the rescuer locates the snare and cuts it with specialist cutters to deal with the high tensile steel wire.

The rescue cannot be anything but painful and distressing for the badger but once the snare is removed the animal can be delivered as soon as possible to the Cuan Wildlife Rescue Hospital where experienced staff will care for it, with veterinary support if required.

The intention of Cuan Wildlife Rescue is always to return a creature to the wild providing it’s considered to be fit and well enough to look after itself and resume its normal lifestyle. Whenever possible all creatures passing through the hospital are released where they were originally found.

In order to achieve that with badgers its essential to know exactly where they were found and to be confident that there’s a sett nearby. The release is then quite straightforward and is often viewed by the person who initially found the badger.

However this is not the case with orphaned cubs. No matter how quickly they recover, they cannot be returned to their original location because the loss of their support, probably the death of their mother, was the cause of their initial problem and is unlikely to be any different.

The other difficulty with cubs is that they don’t respond well to rehabilitation by themselves so as soon as possible, they are integrated with other orphans of a similar age, usually in groups of four or five that can be released in due course as self-contained social groups.

This will normally happen towards the end of the summer into early autumn when the cubs are 6-8 months old and would have become independent from their parents, although still being part of the social group.

An artificial sett will have been constructed at a safe location where the cubs can be supported for a while, with the sett surrounded by a secure perimeter fence both to keep the cubs in and safe, and to keep others out. The whole process is filmed so once they seem to have settled and any visiting badgers have displayed no more than a passing interest, the fence is removed and the cubs can fully return to the wild.

The artificial sett will remain for them to use if they wish and support will continue in the form of food and water until it becomes obvious that they have become self sufficient.

There is continuing research about the whole issue of managing and releasing orphaned cubs but for the moment at least the consensus seems to be that cubs of this age appear to be accepted quite well into established social groups and the current process seems to work very well. 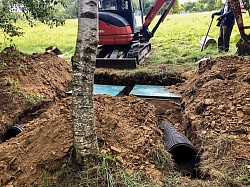 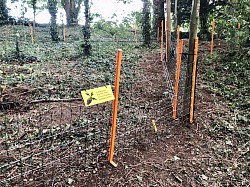 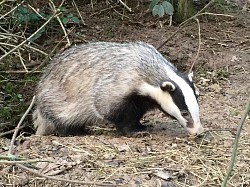 Work to provide a release sett for orphaned cubs with one satisfied resident’.
Made with SimDif 2