Shropshire Badger Vaccination Project is shocked and dismayed at the Government’s announcement of a new badger cull licence for Shropshire, despite their previous promise to phase out badger culling.

As the cull begins in the County, with a target to kill a minimum of 4187 badgers in the next few months, we are seriously concerned that we will see local extinction and the loss of this iconic animal from the Shropshire countryside.

It also seems ludicrous that the badgers we have worked so hard to vaccinate, at a substantial cost, are at risk of being shot and killed despite having no risk at all of contracting bTB.

Over 60% of the badgers are likely to be killed by a controlled shooting method, which can result in animals taking over five minutes to die of bullet wounds, blood loss and organ failure.  Even though this culling method has been condemned as inhumane and ineffective by the Government’s Independent Expert Panel (2014) and the British Veterinary Association (2015), it continues to be widely used by cull contractors to save costs.

There is a huge amount of Government research which shows vaccinating badgers can protect them against contracting bTB from cows and that vaccination can reduce its spread in their population by 79%. (Defra and APHA state that ‘vaccination reduces the rate of new infections in badgers by 76%’ and that ‘vaccinating more than a third of adults in a badger social group reduced new infections in unvaccinated badger cubs by 79%’) They are therefore ignoring their own evidence by allowing this cull to take place.

We understand how difficult farming can be at the moment, and the financial and emotional strain farmers are under,  and we offer an effective and acceptable alternative to culling badgers. With a dedicated  group of highly trained volunteers offering their time for free, badger vaccination in Shropshire is a viable and humane alternative to culling available at a fraction of the cost (less than £50 per badger compared to the thousands it costs to cull, plus the cost to the tax payer of policing the unpopular policy) and should be immediately supported and implemented throughout the County.

Badgers are highly sociable animals and live in close knit groups. Vaccination doesn’t cause them any harm (they often return to the cage trap on the second night)  and causes no social disruption.

Although badgers can carry bTB (as can many other mammals including cats, dogs, deer and humans) it is a disease of cattle that is most effectively controlled on the farm.  There is still no clear evidence that badgers pass bTB to cattle but there is now very clear evidence, using the latest genome sequencing technology, that cattle pass bTB to badgers.  So while culling disrupts badger social groups with a possible detrimental effect on their well being vaccination keeps them healthy and stable in their social groups.

We are proud that many Shropshire farmers and landowners have chosen to work with us and recognise that there is an effective and morally right alternative to culling.  We are also saddened to hear from some landowners that they are intimidated and coerced into signing up to culling and paying substantial amounts of money for something they don’t want.

Whilst most of the farms we have worked on are showing stable populations of badgers,  unfortunately many of our surveys in Shropshire have found disused setts and a significant decrease in their numbers.  This cull could wipe them out completely.

We urge you to write to your M.P. or for more information or even a no obligation chat get in touch via the Shropshire Badger Group using the Contact Form. 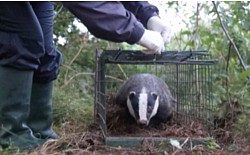 A badger successfully vaccinated and released on one of our participating farms.
Made with SimDif